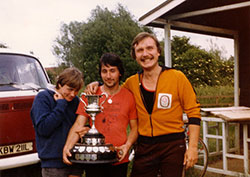 CC is on the extreme right – first rowing prize in 1979 at Oxford (Falcon Rowing & Canoeing Club).

ROWING: I had tinkered with rowing in my teens, but it wasn’t until the late 1970s that I began to take it more seriously. In my third year at Oxford Polytechnic, a trio of established schoolboy rowers thought it might be a good idea to plonk me in the stroke seat of a ‘four’ one day and the rest, as they say, is history.

Within a year Oxford Polytechnic Boat Club had been formed. I was awarded a blade at the end of the season. At the time, you don’t realise the significance of such a period in your life, especially in the shadow of the more august institution down the road.

EXPERTISE – as a qualified coach I’m able to teach beginners how to row, and prepare juniors and veterans for competition. I can also combine my rowing and communications skills to teach business professionals how to pull together and achieve success: Companies can learn a lot from rowing. Like crews, high-level teams of executives operate in stressful, pressure-cooker environments. Both contain ambitious players from diverse backgrounds whose personalities often have edges as sharp as their talents.