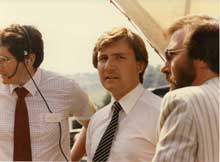 DIGITAL: I’m a former radio man, and television journalist with over 250 hours of studio editing and presenting under my belt. This was mostly live tv and various videoconference broadcasts. In the day, I also anchored a number of canned specials. These skills have been put to good use in the online world where I’ve worked as a consultant and editor on a number of start-ups, and more recently continue to produce, edit and present Roundtable and conference panel discussions, executive interviews and webinars for AV Magazine and Electronics Weekly.

EXPERTISE – live radio and tv presentation, and conference moderation, especially for the business and technology, and telecommunications industries: When you’re trying to communicate potential complexity to a specific audience, your chosen writer, editor, presenter or moderator must possess appropriate industry and product knowledge and be able to exploit digital media to communicate your messages professionally to your key customers and prospects.